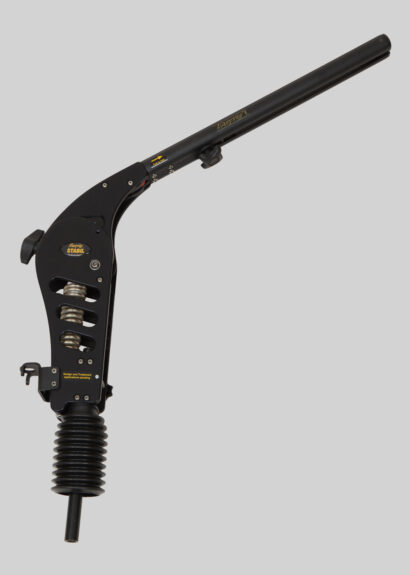 Art.No: ST000
For years Easyrig users have been wanting us to build something that smoothen out shots when walking. The Easyrig STABIL is incorporated into the Easyrig system to make the weight distribution as even and ergonomic as possible. Stabil is the Swedish word for “Stable”.

In April of 2020 we upgraded the STABIL so it’s foldable, making it a lot easier to travel with. We also upgraded the locking pin so it doesn’t jitter when locked in 90 degrees. It now comes with a hanger, meaning that you can now hang the rig on a filmcart (or any other surface with an edge).

In 2022 the STABIL arm was upgraded even further, it is now known as STABIL G3. Users can now lock the arm without having to use a pin.

The Easyrig STABIL G3 can be mounted on to your existing Cinema 3 and Vario 5.
If you need help with this please look at our instruction video which can be found under “Service Videos & Manuals”.

Our resellers operate in over 60 countries - find yours
United States